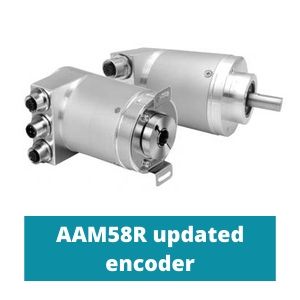 In the spring of 2019, the company announced the release of a new version of the AAM58 series. The letter R is added to emphasize the revolutionary technologies that were integrated in the new assembly. Such series is an upgraded version that meets the growing demands of the industrial automation market.

The new model was improved in the following characteristics:

Performance is greatly improved due to new protocols and hardware. Adaptability is provided by wide flexibility of the device. There is possibility to adjust resolution, direction of rotation and speed units of measure in the equipment.

Upgraded encoders use the new fieldbus system EthernetCAT (Ethernet for Control Automation Technology). This technology was created specifically for working with industrial equipment.

Ethernet CAT is similar to Ethernet system but it has several advantages:

This is achieved thanks to Ring Topology that allows all network devices to communicate more efficiently. An updated version AAM58R fits optimally into such system.

The series also works using the Profinet IO electronic interface. This interface connects several encoders at once to a single network. The big advantage of this connection is the ability to control and configure all devices through a one PC.

New encoder has a metal housing from EN-AW 2011 aluminum and an enclosure rating of IP65. Body external diameter is 58 mm. 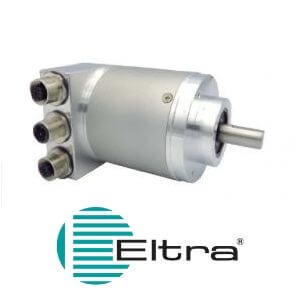 Shaft is made of stainless steel 1.4305 / AISI 303. The range of available shaft diameters reduced to 12 mm compared to the previous types.

Three versions are available in the series:

Models B and C have a solid shaft, while Type F has a blind hollow one.

In addition to standard assemblies, it is also possible to customize the sensor to order.

We are official supplier of Eltra s.p.a. To find out the product availability in the stock and the delivery conditions in your region, please contact our managers! Call now!