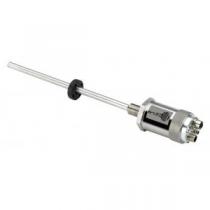 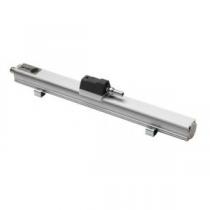 Linear magnetostrictive sensors are devices that can calculate position of an object along single axis by using magnetostriction effect.

The magnetostriction effect is based on the principle of changing objects shape as a result of their magnetization. Phenomenon is based on change in distance between the element`s atoms under the influence of magnetic fields. As a result, there is a physical deformation in shape of the object.

One of the most important parts is the wave-guide. It consists of ferromagnetic elements and transmits pulses to converter. Second most important element is the sliding magnet. Both parts create magnetic fields that intersect with each other during operation.

To perform the measurement in magnetostrictive linear position transducer, the pulse is gone through the wave guide. It creates a radial magnetic field. When magnetic fields created by waveguide and permanent magnet intersect, the Wiedemann effect occurs. As a result, the waveguide is slightly deformed. Due to this interaction, a new wave is created (in the form of sound or ultrasonic), which moves to both conductor ends.

On the one side, such signal is extinguished, thus avoiding the occurrence of unnecessary interference. A special device is installed in opposite direction, which converts received impulse into information.

The speed of sound movement has a standard value (about 340 m/s for ultrasonic). Therefore, position determination occurs as a result comparing the time between the start of pulse movement and receipt of reverse signal.

This method has several advantages over other linear measurements:

Italian company produces several series of such devices. They differ in purpose and electrical interfaces. There are the following series of magnetostrictive sensors Eltra:

Each model has several versions. For example, client can select the stroke length. Presented devices have a waveguide length in range from 50 to 1500mm. Difference also contains in transmitted signals type and movement speed of the magnet (cursor).

All devices have an absolute type of signal, it means that in situations when a power turns off and then switching on, sensor will immediately report current object`s position.

All series devices are mounted axially. It is important to pay attention for correct parts location during installation.

When mounting occurs, it is necessary to ensure that cursor positioned with the optimal fit to sensor axis. It should be placed on non-magnetic supports (brass, aluminum, stainless steel AISI 316) to avoid unnecessary interference.

Necessarily provide all specified tolerance for correct operation. The housing on the control side should also be grounded.

On our website eltra-encoder.eu you can find models of all presented series eltra linear magnetostrictive transducers (EMSPA, EMSPB, EMSPS, EMSSA, EMSSS). We are official supplier of company so you can buy eltra encoder or linear magnetostrictive sensors here at the most optimal prices. You can check stock availability and delivery method to your region by contacting us according to specified numbers. Call now!