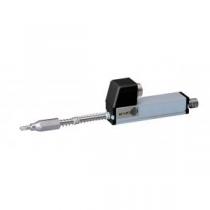 A linear potentiometer is a device that can measure movement of an object along a straight path, by adjusting the resistance within the system.

A potentiometer is a device that is regulated by voltage parameters. It is also often called as a potmeter or pot. Such operation is performed by moving a special sliding contact (wiper) along resistive element. Their location and interaction will determine the type of device. For example, in a rotary variation, the resistive strip forms a circle, and in a linear devices it`s located in one line.

According to the principle of operation there are following types of potentiometers:

Resolution of the potentiometer is different from encoder resolution. It`s determined by the smallest possible change in resistance coefficient in system.

All potmeters produced by Eltra s.p.a. operating according to absolute encoder working principle. This means that appliance is able to remember special code value of current position even after power off. Therefore, they do not require setting a zero point to get started. When device is re-enabled, it will immediately provide information about last position of the object.

The company produces several types of such devices. They are separated by specifications and designed to work in different conditions.

Eltra EPLA is absolute type of potentiometers that have reliable mechanical protection. They are able to withstand shocks and vibrations perfectly. Piston stroke has a range from 50 to 9000mm. The direction of connection is axial.

Eltra EPLC is an absolute linear potentiometer that works without an internal rod. Instead of usual rod, special cursor is set here with a built-in clutch. It slides along the stroke axis. Such design solves problems with compressed air during the work. It has a large piston stroke range from 100 to 1500mm. Device installed in axial direction.

Eltra EPLT is a linear absolute potentiometer without cursor but with sensor control system. Work is performed by using a stainless steel sphere. It`s attached to threaded tip with a spring. The device has a short stroke interval. It is connected in the axial direction.

In all presented series, it is possible to additionally select the type of connector from several versions. All devices also have excellent resolution.

In general, potentiometers are excellent appliance that can successfully replace linear magnetic and optical encoders in some cases. Devices of this type can operate in the harshest conditions, as well as in places with strong magnetic fields.

All series of linear potentiometers Eltra are presented on our website eltra-encoder.eu To choose the right model for your conditions, contact our managers, and they will be happy to help you! Call now!