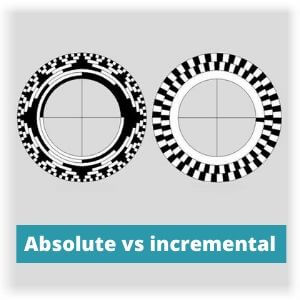 Let's take a look at types of disc encoding in detail. Firstly, we consider the rotary encoders, and then describe the linear ones.

You can read more about existing encoder types, including linear and rotary versions in the article Types of encoder. 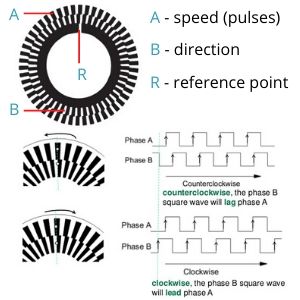 Such sensor has a disc with special marks on its surface. The marks don’t have unique values and are identical to each other.

The incremental encoder can determine:

Several types of marks can be used for different purposes. To determine the speed, one raw of marks is applied to the disc. There are a certain number of them on the disc’s surface.

Encoder have resolution, which is indicated in ppr (pulses per revolution). That is, the accuracy is determined by how many pulses the sensor transmits in one complete revolution.

Attention! Read your supplier’s instructions carefully, as several manufacturers sometimes take into account the entire cycle, and sometimes the highest point of the signal (logical 0 or 1). So, resolution may be different depending on a producer. 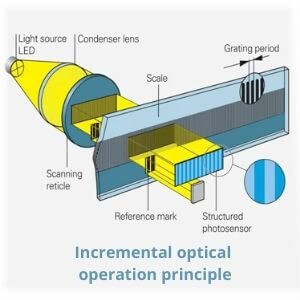 How does the encoder determine the direction the disk is moving? Indeed, the incremental encoder has all the same marks. There is a second signal (from another source) to determine rotation direction. Both signal waves are offset from each other by a quarter.

Sometimes a second row of marks is applied, sometimes the sensors are offset against each other and located at the same line. Depending on current direction (clockwise or counter clockwise), the waveform of signals will vary. Device compares two graphs and determines in which way the disk is moving.

The last important point of encoding an incremental disc is reference points. These marks are needed as a guide for sensor.

After turning off power in device, all data is reset, hence, each new report starts from zero every time because all marks are the same to sensor. When sensor passes through a reference point, a controller receives information about current value encoded in it.

The most often, this option is used to set a zero impulse, which indicates that disc has made one full revolution. It may also determine a certain value of impulses, for example 50 or 100. These points can be combined with each other at the one surface. 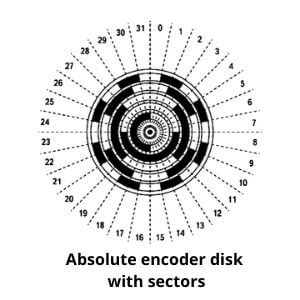 In absolute sensors, unlike incremental ones, all labels are unique. Each point has its own code, which allows it to be accurately determined (so-called absolute position). Therefore, these encoders determine the exact current offset angle.

Its disc is divided into unique sectors. In each of them, a number of symbols are encoded at the surface. Since they are arranged in several rows, many sensors must be used at once to recognize current position. The disc itself has a complex pattern and is quite difficult to manufacture.

However, the main advantage of an absolute encoder is that there is no need to set a zero point. If power supply disappears at some mark (46°, for example), and then turns on, the device will immediately report that its disc is rotated 46 degrees.

Ok, we have looked at rotary sensors. What about linear ones? How are linear incremental and absolute encoders different? The principle of linear encoders sensing is similar to rotary, only instead of a disk, its marks are marked on the tape. 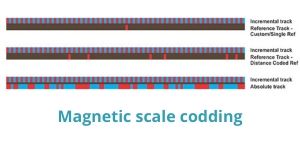 On a linear incremental scale are placed marks of direction and speed, as well as reference ones (including zero point etc.). On a linear absolute scale, marks also have unique coded position.

For all technologies (optical, magnetic, inductive, etc.), this principle of operation is the same. In the optical version, transparent and opaque marks are applied to the scale, in the magnetic version located poles of north and south, etc.

Advantages and disadvantages of incremental and absolute encoders

Summing up the results, let's note the main pros and cons of using different types of coding. 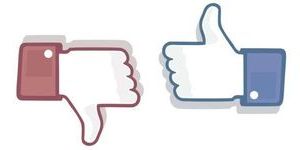 Such sensor should be used for simple tasks when you need to monitor distance or speed. For complex purposes, you need to buy encoders with reference points that match with your tasks. 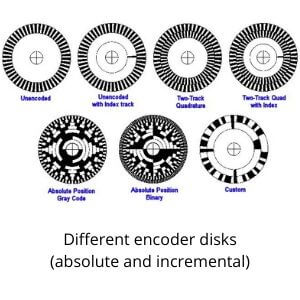 Absolute sensors are suitable for applications where it is very important to give the exact position and keep data even when the device is turned off (for example, coordinate machines).

On our site, you can find all existing incremental and absolute encoders by Eltra.