The physical phenomenon of magnetostriction is based on the following principle: when the magnetization of an object changes, its volume and linear dimensions also change.

The main parts of the magnetostrictive transducer are:

Ferromagnetic waveguide is the heart of the whole device. The pulse from a source moves to the current slider position through it. This pulse creates the second magnetic field.

Strain pulse converter receives a signal that moves from a positional magnet (from point of its location). The signal moves with the constant speed (ultrasonic). Hence, it is possible to determine the travel time of the signal and, therefore, the distance it has traveled.

Damping zone damps or skips a signal directed to the opposite side of measuring head. This detail removes interference and the initial electrical pulse from source and does not allow its reflection from another side.

The main features of these sensors include non-linearity coefficient less than 0.02% and excellent repeatability of measurements up to 0.001%!

Eltra s.p.a. produces the sensors with two types of output signals: SSI and analogue. All devices of this category are absolute sensors. They determine an absolute position of magnet. Thus, they do not require a starting point and can determine a position immediately after switching on. 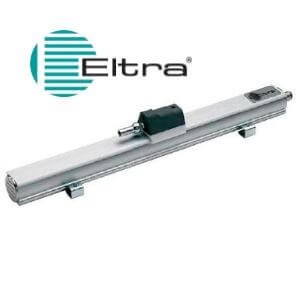 Devices that use magnetostrictive principle have excellent resistance against mechanical stresses and shocks.

Let's look at all the series in detail.

It is a linear magnetostrictive transducer with an absolute position sensor and analogue interface.

It has 6 different types of outputs for working with one or two cursors:

Cursors may move in distance between 50 and 1500 mm. Their maximum speed of movement reaches up to 10 m/s. The manufacturer produces two types of the cursors: sliding and floating. EMSPA series measures displacement and speed.

Maximum resolution of the device is 16 bits. The coefficient of linear error is 0.02%.

This series is similar to the previous one. However, only two types of output signal are available here: 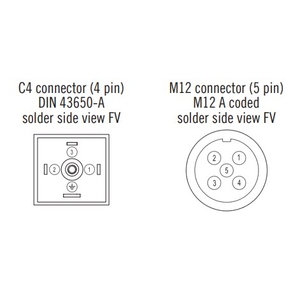 Only single cursor variants are available. This type will be optimal when it needs to perform simple tasks. The stroke length reaches from 50 to 1500 mm at travel speed up to 10 m/s.

Such device only measures a cursor position. The devices are mounted axially using C4 (4 pin, DIN 43650-A) and M12 (5 pin) connectors. Its body is made of aluminum or nylon and has an IP65 level.

Its repeatability is less than 0.01 mm. Minimum linear error is equal to ± 0.04%. Its maximum resolution is infinite.

The EMSPS converters have the following options of data length:

These devices operate with a resolution of 0.002 mm to 0.040 mm. Such transducers have a stroke of up to 1.5 m and travel speed of up to 10 m/s. Its case is made of identical materials, as in the previous series. The units operate at temperatures up to 90 °C (194 °F). For data transmission, binary and gray codes are used.

In addition to the main standard series, the company also produces special types of devices for direct installation (available in EMSSS and EMSSA series).

Our company is official distributor of Eltra s.p.a, and we supply all presented products Worldwide! If you need magnetostrictive transducer, our managers will solve your problem! Call now!